Bronze turkeys are broilers. Their peculiarity is a dark shiny plumage with a metallic sheen. Bronze turkeys are appreciated by farmers for their high meat and egg production. With a balanced diet, the average weight gain per month is 1.5-2 kilograms. There are two varieties that differ in the characteristics of their cultivation.

The origin of the breed

Bronze turkeys were first bred in the 20th century in the United States, which is why they are called American broad-chested. The selection used African and Norfolk turkeys. The breeders were faced with the task of developing a productive breed for industrial breeding. They succeeded: American bronze turkeys gain weight well, the breed is characterized by high egg production. But only indoor housing is suitable for birds.

Domestic breeders continued the work of their American colleagues and improved the breed. In the North Caucasus, bronze turkeys appeared, adapted for growing on pastures. The largest and earliest hybrids of the local and American bronze breed participated in the selection selection.
Expert opinion
Zarechny Maxim Valerievich
Agronomist with 12 years of experience. Our best cottage expert.
North Caucasian turkeys with bronze plumage are among the achievements of Russian breeding. The breed was registered in 1956 and distributed in Central Asia and southern Russia.

American broad-breasted turkeys are distinguished by their plumage: 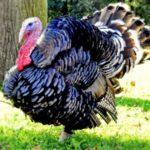 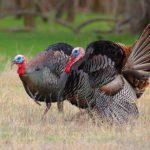 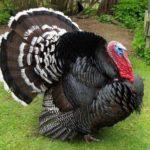 The large and heavy body of bronze broad-chested turkeys is supported by strong legs. The age of the birds is determined by the color of the paws: black - in young animals, light bodily, pink - in mature, old birds. The unfeathered part of the head is covered with white coral growths. A long nasal growth hangs down from the beak.

The plumage of North Caucasian turkeys has brighter bronze-green shades. The feathers on the body are shiny and the tail is matte.

The external differences between domestic turkeys also include:

Common in the appearance of the American and North Caucasian breeds are a wide massive body and a small head, long wings and a fan-shaped tail. An interesting feature of the domestic variety is that the red growths turn blue when the birds are alarmed. 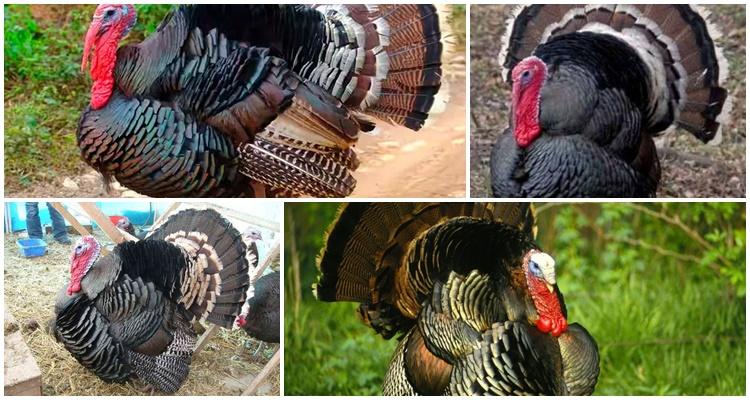 The rate of weight gain for varieties is displayed in the following weight table:

Birds fed in a poultry farm gain weight up to thirty kilograms. Turkeys in private households rarely reach their maximum weight. Adult males outweigh females by 10 kilograms. Bronze turkeys lay 55-70 eggs per season. The survival rate of turkeys is 70 percent. The fertility of eggs is 90 percent. Females begin to rush from nine months. 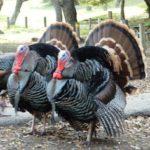 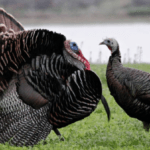 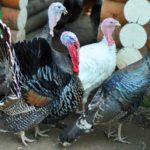 Benefits of bronze breeds of turkeys:

It is necessary to distinguish between American and North Caucasian turkeys, since the former cannot be kept on free grazing. Birds of the domestic variety gain less weight. A turkey of a bronze broad-breasted breed after slaughter looks unpresentable due to the black plumage. 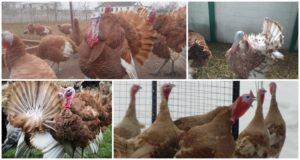 Description and characteristics of fawn turkeys, their breeding and care

Rules for keeping and caring for birds

Bronze turkeys of foreign and domestic varieties require approximately the same conditions of detention. The differences relate to the arrangement of the poultry house. American broad-breasted turkeys are kept without walking, so a ventilation system must be provided in the room.

Successful home cultivation depends on the correct calculation of the size of the room. When fattening, four chicks of three months old or two adults are placed on one square meter. How to set up a poultry house: 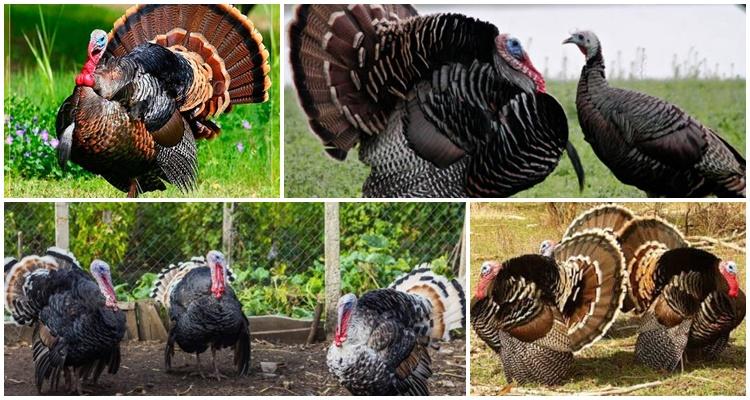 The floor of the house is covered with a thick layer of peat, straw, hay or sawdust. The litter is loosened every day and changed every 10 days. Despite the heavy weight, it is necessary to establish perches for the turkeys. To conveniently remove droppings, pallets are placed under the perches. The duration of daylight hours for high productivity of turkeys is 14 hours. Therefore, it is necessary to install lamps for additional lighting of the house in winter.

Installation of feeders and drinkers

Stainless steel bunker feeders are used to feed bronze turkeys. They are hung in the center of the room so that all the birds can come up. Separate dishes are taken for dry and wet food. The leftovers are removed and the feeders are washed. Vacuum drinkers are installed for turkeys, and cup drinkers for adult birds. The nipple drinkers are considered the most hygienic.

Indoor birds are equipped with a walking paddock. From the premises make an exit to the fenced area in the fresh air. The land is sown with grass. Turkeys are allowed to walk for an hour a day. Also for birds, they put containers with ash for bathing. In summer, North Caucasian turkeys can be grown on grazing - during the day they can be released onto the lawn with field grasses, and in the evening they can be driven into the poultry house. 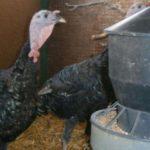 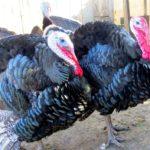 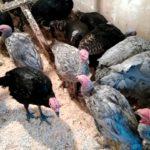 How to feed bronze turkeys?

Poultry farms practice intensive cultivation on compound feed.The ready-made mixture contains cereals, vegetables, vitamins and stimulants, which provide an optimal balance of substances in the body and quick weight gain. When growing bronze turkeys for personal needs, breeders independently prepare a feed mixture from cereals. Fresh herbs and vegetables must be added to the diet. The main share is protein, which is found in cereal concentrates. Poultry obtain fiber and vitamins from plants and vegetables.

Wet food is prepared for turkey poults - grains and vegetables are kneaded in meat or fish broth.

In the second month of life, turkeys are given 5 grams of cake per day. Also grown chicks like green onion feathers. Turkey poults drink half a liter of water a day. From the tenth day after birth, young animals are allowed to drink a weak solution of manganese twice a week to prevent intestinal diseases. Turkey poults and adult birds are fed three times a day, and layers four times. Wet mixtures are given in the morning, and dry ones in the afternoon and evening. 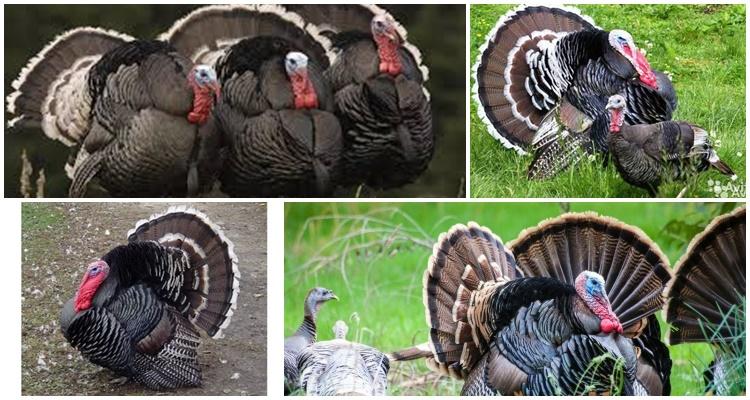 In small farms, birds are kept together, there is one male for 15 females. In large poultry farms, chicks are raised together until the sixth week of life, and then sorted by sex. When kept together, the grown males start fights. 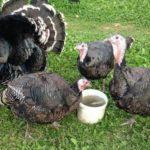 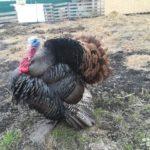 Medium-sized turkeys are chosen as producers, since a male that is too heavy can crush a female. In poultry farms, fertilization is carried out artificially. North Caucasian and American broad-breasted turkeys are bred within the breed. The productive period of breeding turkeys is 4 years. Bronze turkeys are very early maturing. But with constant lighting, egg production occurs 1.5 months earlier. Females lay eggs 5-9 months a year. The weight of a turkey egg is 90-100 grams. 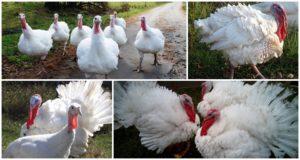 Description and characteristics of heavy cross turkeys, their breeding

Turkeys incubate their own clutches and laid eggs of ducks and chickens. The hatching instinct is best developed in two-year-old hens. Chicks hatch 28 days after clutch formation. It is difficult for newborn turkey poults to break through the shell. Therefore, you need to carefully break off the pieces at the chip. The hatched chicks are planted with the brood hen. Turkeys take care of the offspring for a month: they warm them up, teach them to walk and get food.

Bronze turkeys are slaughtered at 4 months, and turkeys at 5-6 months. Further fattening and maintenance does not pay off. The readiness of birds for slaughter is also determined by body weight. The optimal weight is 12 kilograms. But usually they are guided by age, since there is a possibility that the turkey will gain more weight. Later, the mass gain stops. Birds eat more food, but do not get heavy. 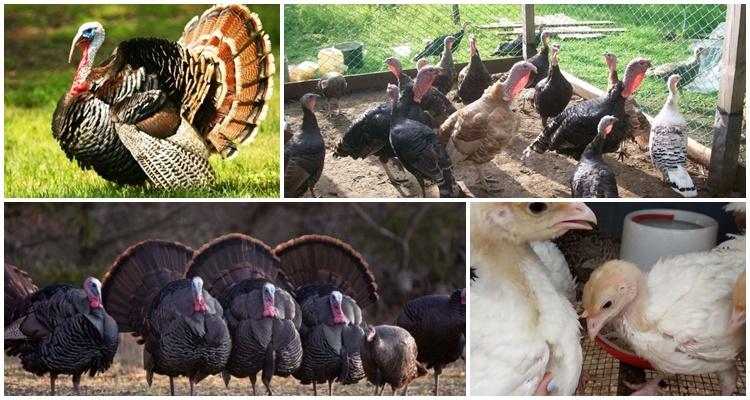 Diseases and their treatment

Bronze breeds of turkeys have strong immunity. But if the rules of hygiene in the poultry house are not followed, an unbalanced diet and the absence of vaccinations, birds become vulnerable to infections.

The most common disease that occurs in all types of poultry is parasitic infection. Turkeys become infected with worms through water from reservoirs, grass from swampy areas.

As a result of improper feeding, turkeys develop vitamin deficiency and enteritis. The lack of fresh air and light in the room causes a lack of vitamin D. Therefore, even when kept indoors, birds should be allowed out for a short walk. 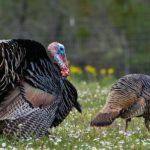 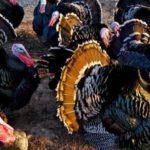 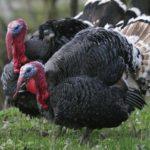 Without vitamin A, turkeys become weak and lose feathers. To replenish the substance, you need to add carrots to the diet. For the prevention of vitamin deficiencies, ready-made mineral additives - premixes are added to the feed for chicks and adult birds.

Unhealthy birds have the following symptoms:

Sick individuals are removed and a veterinarian is called. It is not recommended to treat birds on your own, as this can lead to an outbreak of a dangerous disease. Bacterial infections develop quickly and have similar symptoms. A veterinarian can accurately determine the disease. If typhoid, smallpox or tuberculosis is detected, it will be necessary to destroy sick birds, and keep the rest of the livestock in quarantine. To prevent infections, the walls of the house are covered with slaked lime, and the dishes are treated with antibacterial agents once a month.

Description and characteristics of victoria turkeys, content of crosses
To read

Description of blue slate turkeys and characteristics of the breed, breeding
To read

Description of turkeys of the Bronze-708 breed, maintenance and care at home
To read

Characteristics and description of the Cochinchin chicken breed, maintenance rules
To read
There are no reviews, be the first to leave it
Leave your review
Click here to cancel reply.
0
2
0
0,00 out of 5
Lunar sowing calendar
For gardeners and gardeners for 2020
Look
Popular records 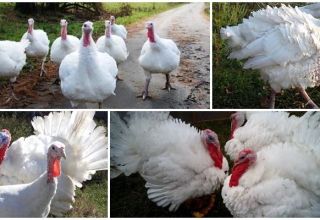 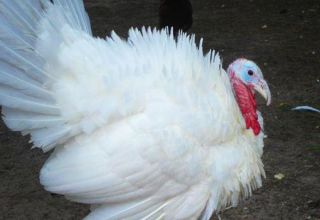 Description and characteristics of victoria turkeys, content of crosses
The victoria cross turkeys were bred in Russia, near Stavropol. To remove ...
0
2
0 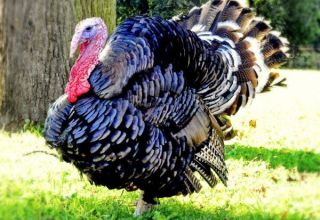 Description of turkeys of the bronze breed and their cultivation at home
Bronze turkeys are broilers. Their feature is dark shiny ...
0
2
0 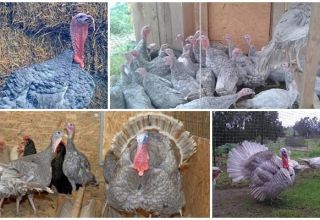 Description of blue slate turkeys and characteristics of the breed, breeding
Blue turkeys are an interesting and distinctive breed. They are often ...
0
3
0
Right now watching 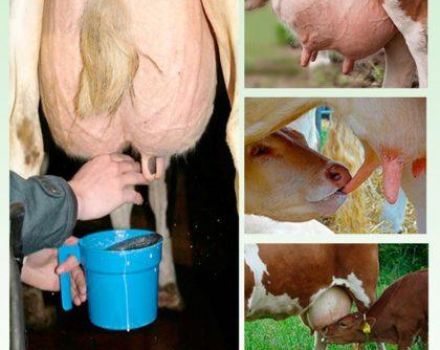 How many times a day and a day a cow should be milked and what affects the number of milkings
Compliance with the technique and milking regimen is considered one of the most important factors in livestock breeding ...
Description of the Fater Rein tomato variety, its characteristics and yield

What kind of woodcock bird is and what it looks like, habitat and what they eat
What to do if the onion rots in the garden, how to deal with it and how to process it
﻿