The timing of how much potatoes grow and ripen from planting to harvest?

Potatoes are one of the most common vegetables, without which it is difficult to imagine a summer cottage. Potato ripening time depends on many factors. First of all, this is the variety of tubers itself, as well as climatic conditions. If the first factor can be influenced, then the second has to be simply put up with. If it is a cold summer, then the harvest can be poor.

After how many days to dig out potatoes?

When planting potatoes, it is important to consider the region of residence. In different areas, the time from planting to harvesting the same variety can vary due to differences in climate. 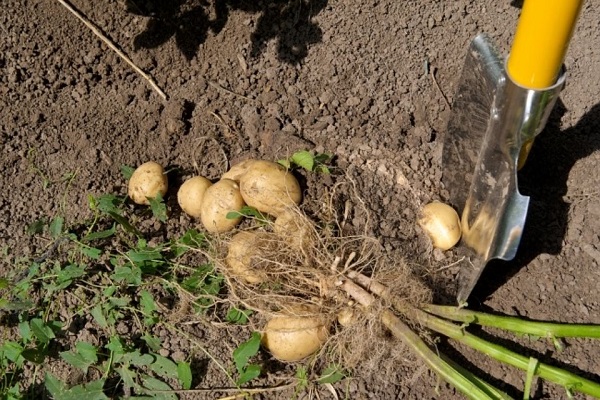 The growing season by varieties of potatoes:

The growing season can vary up or down. Again, this depends on the weather conditions during the season. It is impossible to influence this. 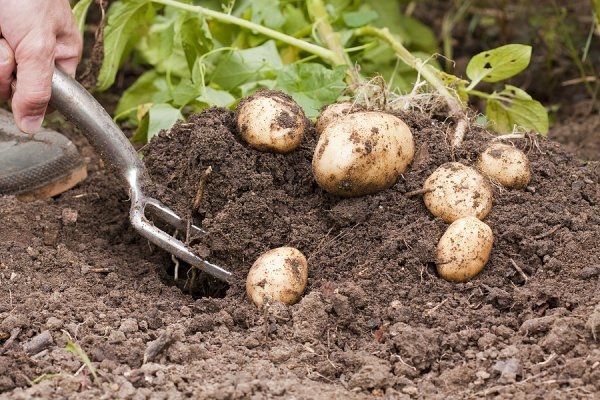 What determines the rate of ripening of tubers?

But, even having chosen a variety according to the ripening period of the tubers, after planting one cannot be sure that the harvest can be obtained precisely by a specific date. A large number of factors affect the growing season. 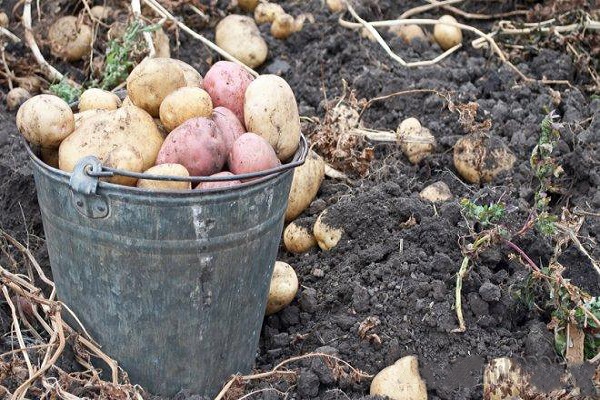 If the growing season is shortened for the last two reasons, then such potatoes will not be so tasty, and will also be poorly stored. Therefore, if possible, it is advisable to regularly water the potatoes (if there is no rain in summer) and, before planting the potatoes in the open ground, add mineral and organic fertilizers to the ground. When the tubers ripen on time, they are delicious and can be stored for more than one month. 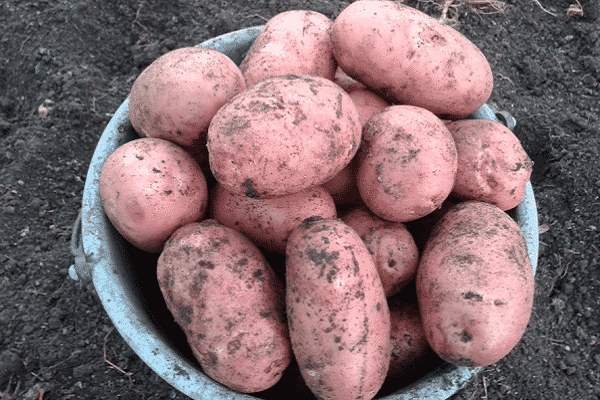 How to accelerate the ripening of potatoes?

You can try to speed up the ripening of potatoes after the flowering period in order to new potatoes did not have to dig in late autumn.This will help those summer residents who have delayed planting planting material. You can also try to increase the growth of potatoes if it is a cold and rainy summer. 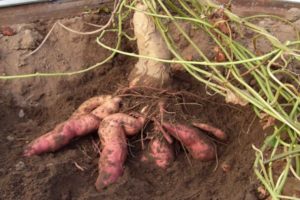 Description of sweet potato Batat, its benefits and harms, cultivation and care

What to do if the bushes have grown strongly and cannot be delayed with harvesting? 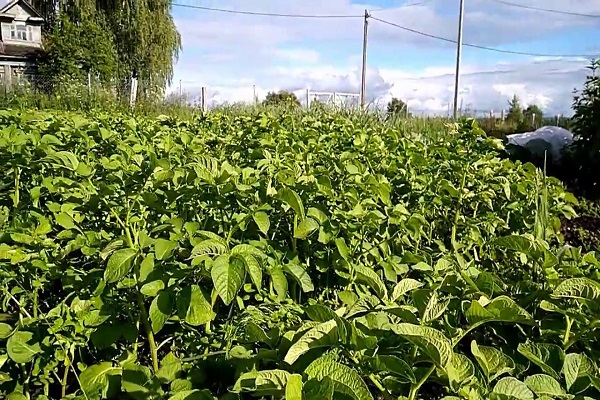 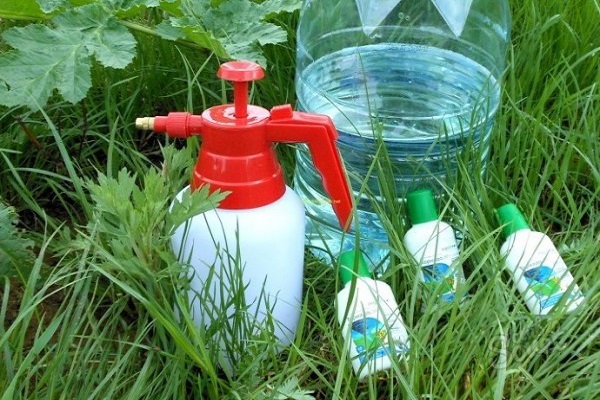 After these procedures, the stages of potato growth will be reduced and then you can safely dig up young potatoes without fear of damaging it in the ground. This issue is especially relevant for those summer residents whose plot is located in a lowland where water accumulates or when the ground contains a lot of peat and potatoes grow slowly. 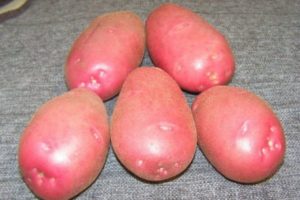 Description of the Ryabinushka potato variety, cultivation features and yield

When to dig up potatoes?

As mentioned earlier, potatoes ripen in different ways. By what signs can you determine that it is time to dig out the harvest?

The main signs of ripening potatoes: 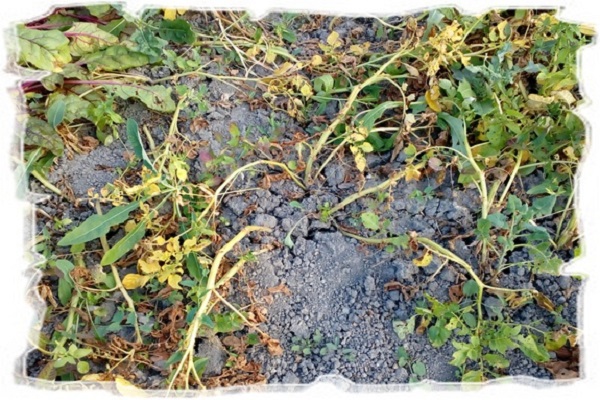 Dig potato harvest it is possible at a temperature not lower than +17 degrees.Then, during storage, the potatoes will not turn black and spoil. The most unfavorable time is the morning hours, when frost has already come. If you dig up potatoes at such a time, then they will quickly dry out and cannot be eaten. 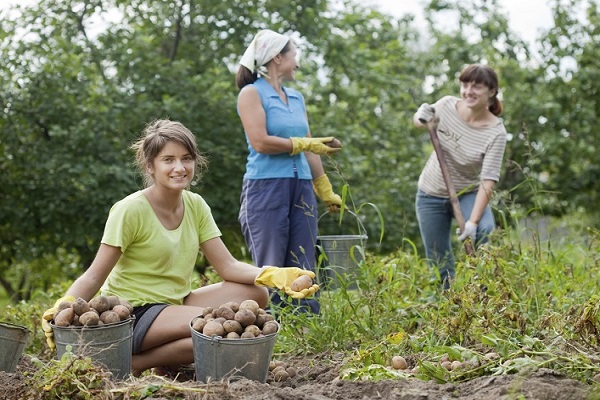 After harvesting, you must collect all the tops and weeds. If this is not done, then on the next goal the site may be overgrown with weeds and then it will take a long time to remove it from the garden.

While digging up potatoes, you can immediately select the best and largest tubers for further planting. They need to be left in the sun for several days so that solanine begins to accumulate in the potatoes. The rind should take on a greenish tint. Such tubers will be stored longer and will not be spoiled by rodents. And next year you can grow a good harvest from them. 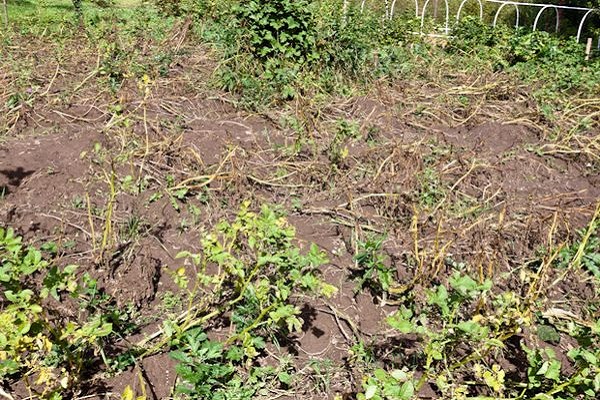 If space permits, then before putting the potatoes into the basement, they need to be kept in the sun for a while. In this way, you can kill all pathogens, as well as increase keeping quality.

Dried potatoes must be scattered into bags, after throwing out the spoiled and gnawed tubers. It is advisable to store potatoes out of direct sunlight so that they do not germinate. The room should be well ventilated, the humidity in the cellar should be high. Observing all the rules of planting and storage, you can eat potatoes all year round. 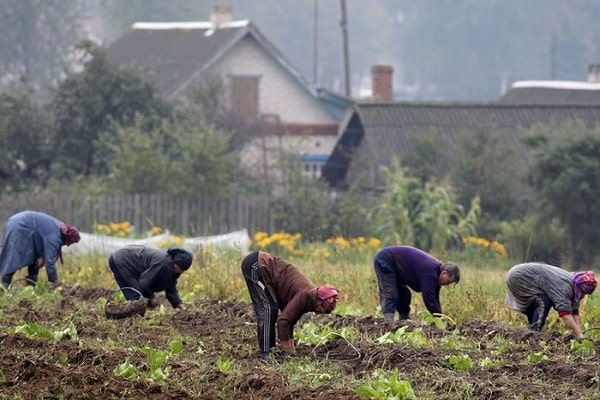 How to make potatoes sprout faster before planting
To read

How to plant potatoes correctly to get a good harvest?
To read

Description of the Gala potato variety, features of cultivation and care
To read

Pros and cons of growing potatoes according to the Mittlider method, how to plant correctly
To read

When can you dig young potatoes after flowering?
To read
Reviews
Leave your review
Click here to cancel reply.
2
4698
22
4,40 out of 5
Lunar sowing calendar
For gardeners and gardeners for 2020
Look
Popular records 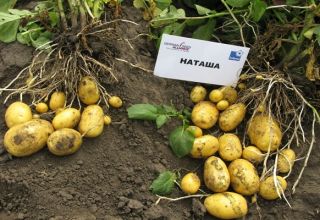 Description of the potato variety Natasha, its characteristics and yield
Potato Natasha is a variety that is highly productive and promising. By...
1
1443
26 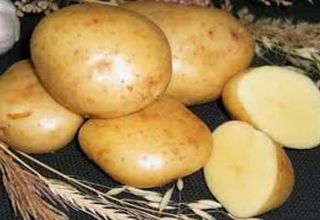 Description of the Gala potato variety, features of cultivation and care
In the spring, before planting a vegetable garden, you should pay attention to Gala potatoes, ...
1
1246
26 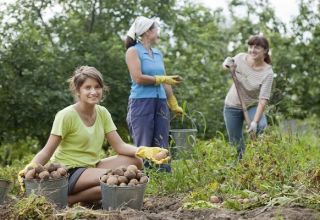 The timing of how much potatoes grow and ripen from planting to harvest?
Potatoes are one of the most common vegetables, without which ...
2
4698
22 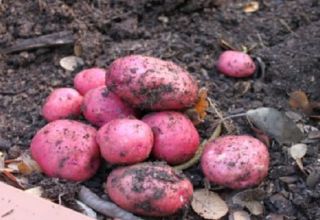 Description of the potato variety Hostess, features of cultivation and yield
The Hostess potato is the result of selection of high-yielding varieties for growing in ...
1
802
20
Right now watching 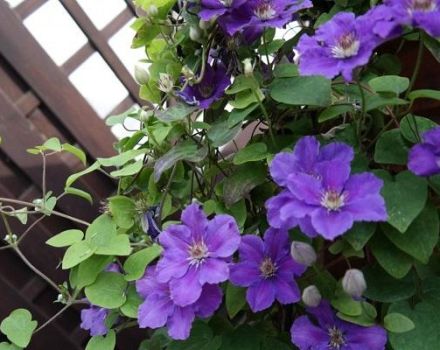 Description of clematis varieties Ashva, planting and care rules
Every self-respecting summer resident tries to decorate his site by planting beautiful, ...
Recipe for blackcurrant five-minute jelly for the winter