The cucumber is a rather delicate plant that immediately begins to react to improper care, temperature changes, or inappropriate soil. That is why many vegetable growers are faced with a problem when cucumber leaves turn yellow at the edges. Having found the first signs of such changes on the bushes, it is necessary to immediately start treating cucumbers.

Why do the leaves turn yellow

Before you start fighting the yellowing of cucumber leaves, you need to familiarize yourself with the main causes of this problem.

When growing seedlings in a greenhouse, you must carefully monitor the temperature in the room. It should not be too high, as this activates the development of bacteria and leads to rotting of the roots. 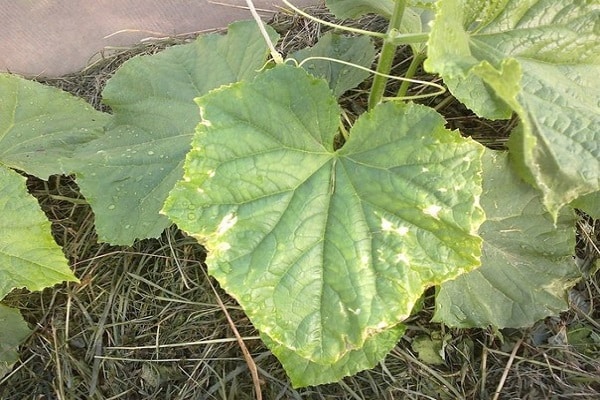 Sometimes the color of the leaves of cucumbers begins to change due to an unsuitable place for growing vegetables. So that cucumbers do not have any diseases, it is necessary to choose areas with good lighting for growing them. However, this plant also needs shade. Therefore, it is necessary to pick up a place in the garden that would be partially shaded so that the cucumbers are not hot and their leaves do not turn yellow. 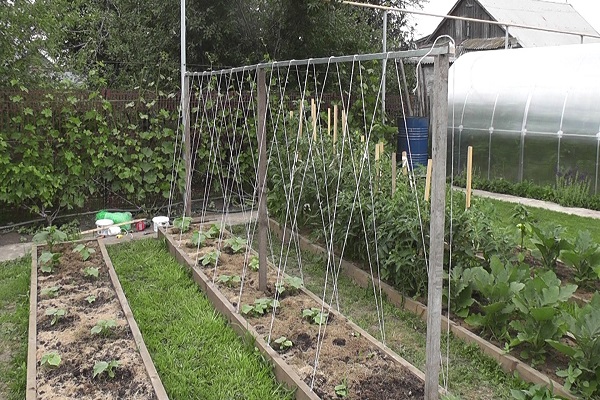 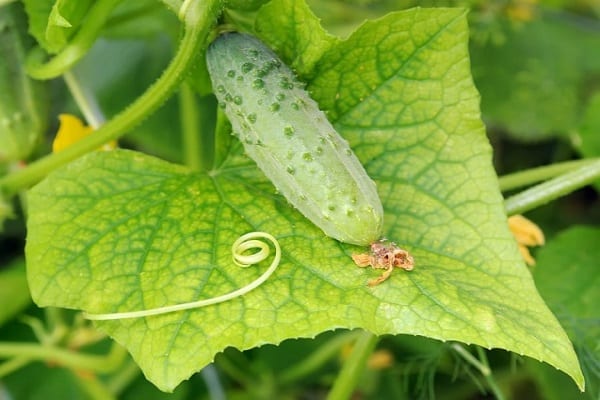 Some vegetable growers associate the appearance of a yellow coating on the leaves with improper watering. Most often, the edges of the leaves of a cucumber turn yellow with insufficient moisture in the summer. However, sometimes this problem appears due to the wrong watering regime. After all, many people prefer to water vegetables often and little by little. In this case, there will simply not be enough liquid to penetrate into the deep soil layer, where the roots of the cucumbers are located. This leads to depletion of the root system and the gradual appearance of yellow spots on the leaves on cucumbers. 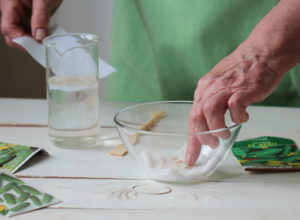 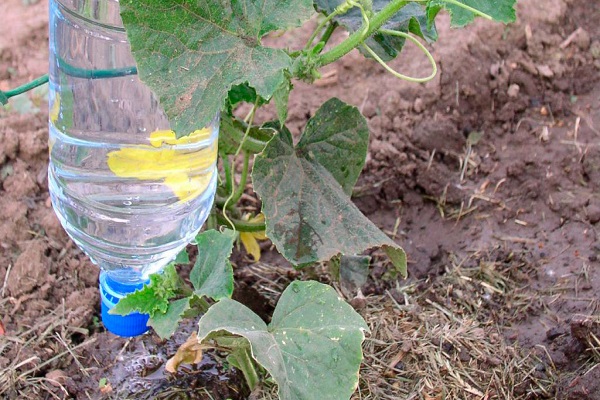 Sometimes the plant turns yellow after the appearance of powdery mildew. It is quite simple to determine such a disease in cucumbers. First, a white spot appears on the lower leaves of the cucumbers. After a week, the disease gradually spreads to the leaves in the upper part of the bush. First, the edge begins to turn yellow, and then the leaves dry up. If powdery mildew is not cured in a timely manner, then all the leaves will fall off and the plant will die.

You can get rid of the disease with the help of the drugs Zaslon or Topaz. It is recommended to use them before the first fruits form on the bushes. 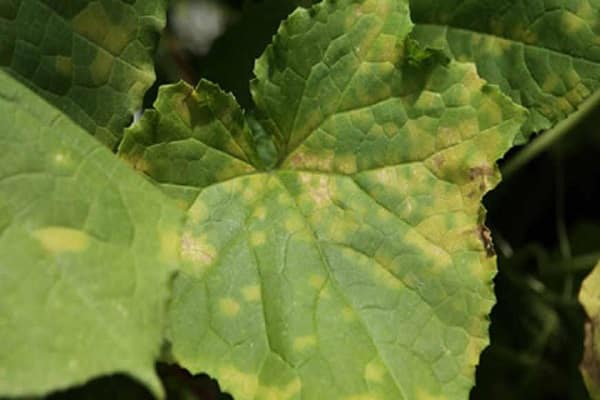 Another reason why a yellow border appears on the leaves is Fusarium. Because of this fungal disease, all the capillaries of the plants are blocked, which complicates the supply of nutrients to the leaves. In most cases, even timely treatment of the disease does not help save infected bushes, and they die. Therefore, it is recommended to get rid of the bush that is starting to turn yellow in advance so that the disease does not spread to healthy plants. 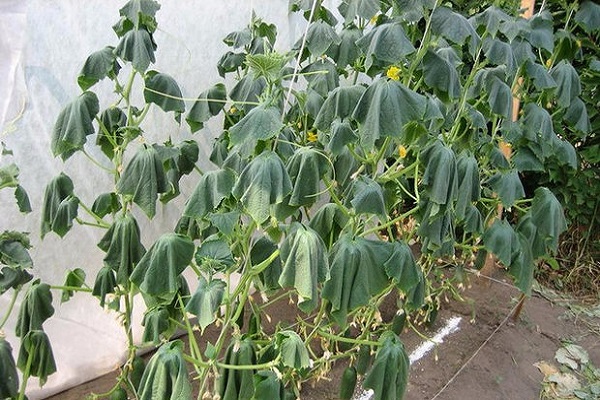 What to do if the bushes turn yellow

Having figured out why yellowed leaves may appear in cucumbers, it is recommended that you familiarize yourself with the main methods of treating yellowness. There are several fairly common remedies that can help remove the yellowish tint from cucumbers. 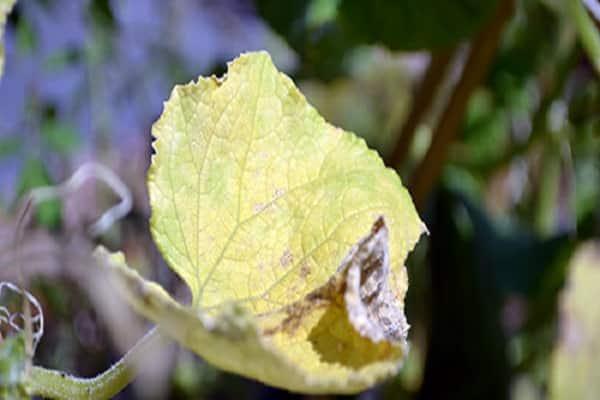 If a yellow spot appears on the cucumber leaf, then it can be sprayed with Fitosporin. It helps to quickly eliminate yellowness and cure the plant from many diseases. This drug is recommended for use during flowering or growing season, since during this period it is better absorbed by plants.

Before using Fitosporin for the treatment of bushes, a working solution must be made. To do this, add about 15-20 grams of the drug to five liters of boiled water. The resulting liquid is mixed and infused for 30-40 minutes. Cucumbers are sprayed once a week for a month. It is not recommended to do this in cloudy weather, as the rain will quickly wash away Fitosporin from the leaves. 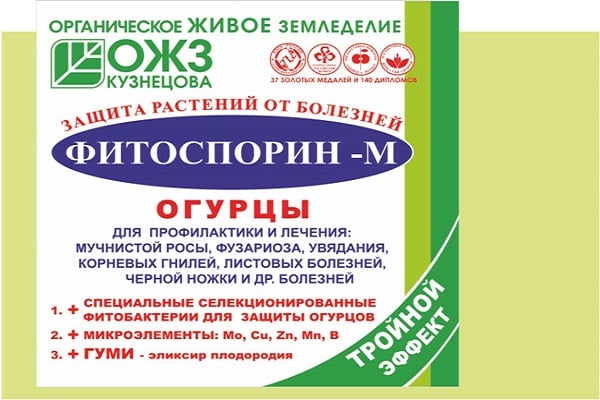 Many gardeners, when the leaves of cucumbers turn yellow, spray them with Oxyhom. This is a fairly effective tool with which you can quickly get rid of diseases at any stage of their development. Oxyhom can be used not only on the street, but also in greenhouses.

The drug is produced in the form of a powder, before processing the cucumber seedlings, it is necessary to prepare a working solution. During its preparation, about 20-30 grams of Oxychom is added to 10 liters of water. The created mixture is sprayed onto the surface of the leaves with a spray gun twice a month. The interval between each spraying should be about 14-15 days. 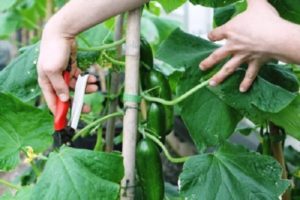 How to pinch cucumbers in a greenhouse correctly step by step 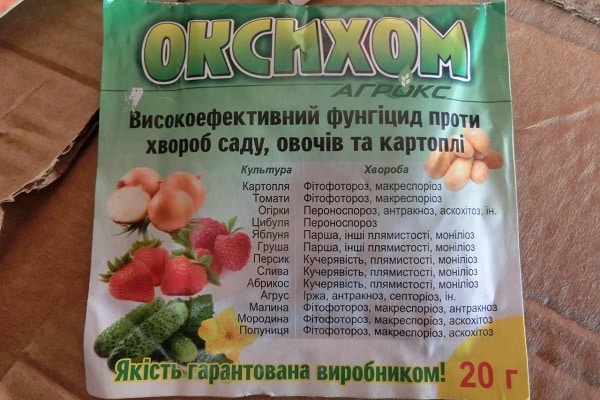 When the leaves have a light edging around the edge, you should use the Topaz fungicide. With this tool, you can cure the bushes from powdery mildew and other diseases caused by fungal bacteria. Topaz can be used not only for the treatment of already infected seedlings, but also for prevention.

The fungicide comes in different forms, but it is recommended to buy Topaz in powder form. To prepare a solution from it, 20 grams of the drug is added to 10 liters of water. During processing, about two liters of Topaz should be consumed per square meter of land. Plants should be sprayed twice a month. If after that the yellow border does not disappear, then the use of the drug is extended for another month. 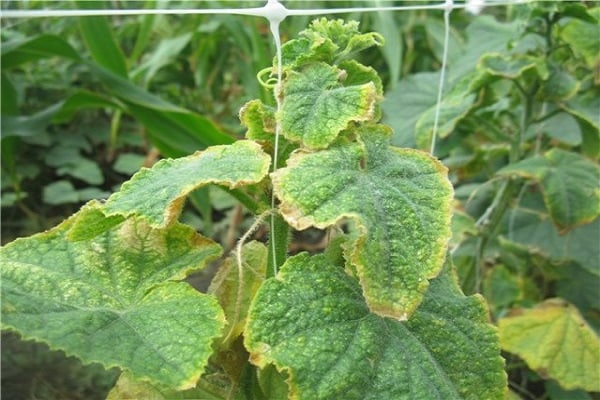 If the edges of the leaves turn yellow at the edge, then you can get rid of this problem with the help of Quadris. The fungicide was developed to combat yellowing and protect vegetables from disease. With its help, you can get rid of powdery mildew, late blight and powdery mildew.Quadris immediately after spraying penetrates the leaves and protects them from further attacks of pathogens. 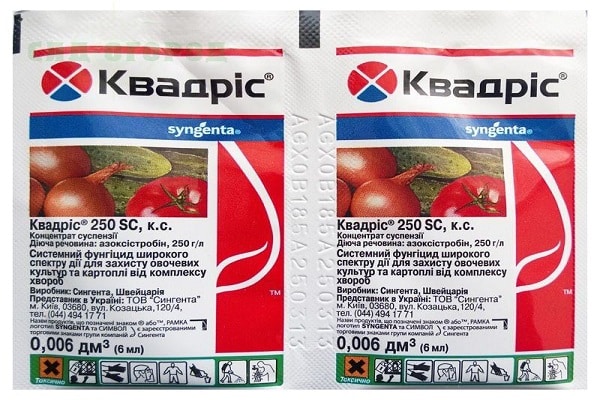 Before using Quadris, you will have to start creating a working mixture. To do this, a quarter of a 10 liter container will have to be filled with water. Then 200 ml of Quadris is added to the liquid. The solution is thoroughly mixed, after which another 2-4 liters of water are added to the container. The prepared mixture must be used within 24 hours, since then it will not be possible to process vegetables with it.

It is recommended to deal with the processing of cucumbers in the complete absence of wind, so that the liquid does not spray the neighboring crops in the garden. 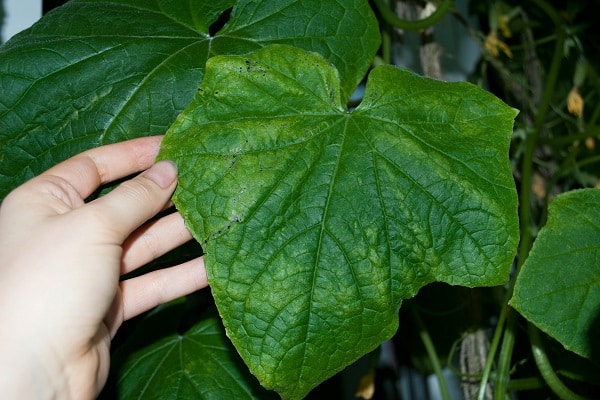 How to feed cucumbers

It is recommended to regularly feed the cucumbers with nitrogen fertilizers, since due to their shortage, the leaves begin to change their color. In this case, fertilizing from nitrogen must be done not very concentrated, so as not to accidentally burn the bushes. To prepare a fertilizing solution, add 20-30 grams of fertilizer to 5-7 liters of water. After applying nitrogen fertilizers, the cucumbers should be watered with warm water. 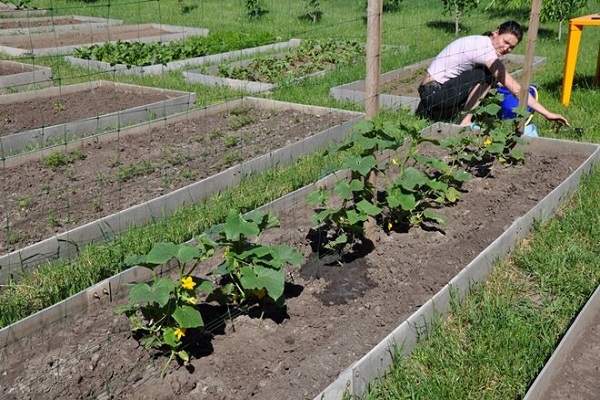 Also, with the help of nitrogen, foliar feeding can be carried out. In this case, the solution will be sprayed onto the bushes with a spray bottle. 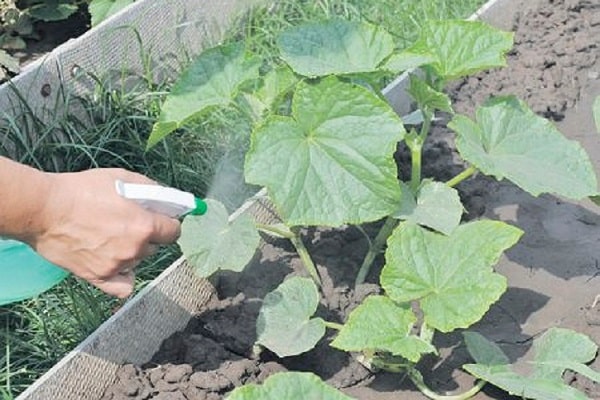 It is no secret that the edges of the leaves of cucumbers often turn yellow and this leads to the death of the plant. Novice vegetable growers do not know how to cope with the yellowness of the leaves. To get rid of this problem, it is necessary to identify the causes of yellowing and choose the most appropriate remedies to combat it. 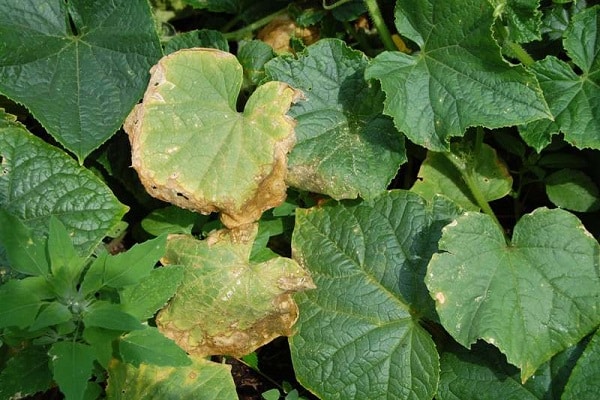 Treatment of diseases of cucumbers in the greenhouse after planting, means for processing
To read

Description of diseases of cucumber seedlings, control and treatment
To read

Why do the leaves of balcony cucumbers dry and take on yellow spots, what to do
To read
Reviews
Leave your review
Click here to cancel reply.
1
7396
33
4,71 out of 5
Lunar sowing calendar
For gardeners and gardeners for 2020
Look
Popular records 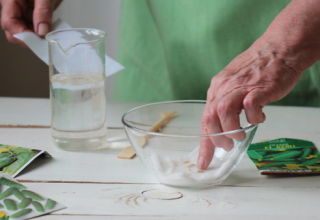 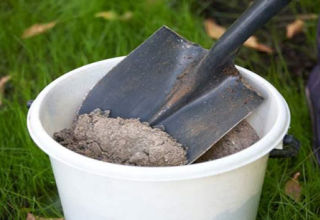 How to feed, fertilize and water cucumbers in the open field with folk remedies
Nowadays, more and more people are trying to grow environmentally friendly ...
1
4330
42 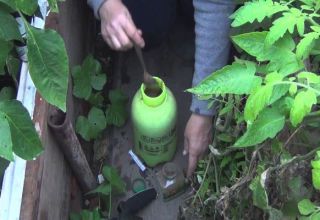 What to do if someone eats cucumber seedlings in a greenhouse, how to protect
Before the new planting season begins, it's a good idea to talk about who ...
1
8532
35 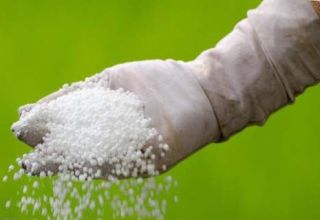 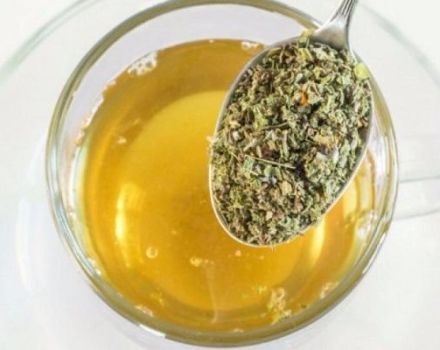 Useful properties and contraindications of Knotweed, application and recipes of traditional medicine
The bird's mountaineer is appreciated for its useful properties, versatility and availability of use, but there is ...
What diseases does vaccination protect goats against and what vaccinations are given

Description of the variety tomato Slivovka and its characteristics
Characteristics of the Solerosso tomato variety, its yield
﻿